CHINA has seen its deadliest day of the coronavirus outbreak so far as the number of deaths leapt by 242 in just 24 hours.

The killer bug has now claimed at least 1,367 lives and infected more than 60,000 people worldwide since the outbreak began two months ago. 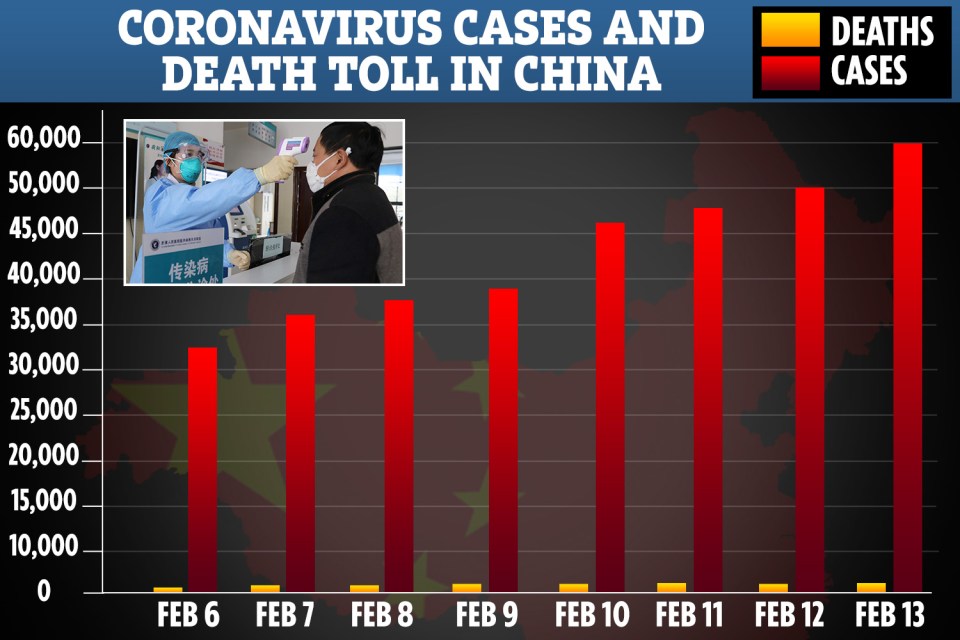 Officials in China said the jump in numbers was linked to a change in how they’re diagnosing new cases, a report said.

It comes as top officials in Hubei province – where the outbreak began in the capital city of Wuhan – were replaced.

Former Shanghai mayor Ying Yong is to replace Jiang Chaoliang as party chief in central Hubei, while two other senior officials have been removed.

Nearly 15,000 cases of the deadly coronavirus were reported in Hubei today.

Health officials said 242 people had died from the flu-like virus yesterday – the fastest rise in the daily count since the pathogen was identified in December.

The change in categorisation appeared to push forward the process to a doctors’ on-the-spot diagnosis rather than waiting for the results of laboratory tests.

Hubei had previously only allowed infections to be confirmed by RNA tests, which can take days to process.

What to do if you're worried you've got coronavirus

BRITISH health chiefs have raised the coronavirus risk to the public from low to moderate.

Health professionals are working to contact anyone who has been in close contact with people who have coronavirus.

The majority of those who have been infected with the virus so far have either visited China or been in close contact with someone who has.

But if you are concerned known the signs is one of the best ways to protect yourself from 2019-nCoV.

In most cases, you won’t know whether you have a coronavirus or a different cold-causing virus.

But if a coronavirus infection spreads to the lower respiratory tract, it can cause pneumonia, especially in older people, people with heart disease or people with weakened immune systems.

It is incredibly contagious and is spread through contact with anything the virus is on as well as infected breath, coughs or sneezes.

The best way to prevent catching any form of coronavirus is to practice good hygiene.

If you have cold-like symptoms, you can help protect others by staying home when you are sick and avoiding contact with others.

You should also cover your mouth and nose with a tissue when you cough and sneeze then throw it away and wash your hands.

Cleaning and disinfecting objects and surfaces which you may have touched is also important.

If you have returned from Wuhan in the last 14 days:

If you are in Northern Ireland, call your GP.

Please follow this advice even if you do not have symptoms of the virus.

Meanwhile, leading symptom-checking provider to the NHS Doctorlink has been updated to help identify patients’ risk of having coronavirus.

But it has begun using quicker computerised tomography (CT) scans, which reveal lung infections to confirm virus cases and isolate them faster.

As a result, another new 14,840 cases were reported in the central province on Thursday, from 2,015 new cases nationwide a day earlier.

It adds a “clinical diagnosis case” classification to identify suspected cases who appear to have pneumonia so that patients can be accepted as soon as possible and treated as confirmed cases, Mi said.

Raina McIntyre, head of biosecurity research at the Kirby Institute at the University of New South Wales, said new diagnostic procedure could explain the spike in deaths.

She said: “Presumably, there are deaths which occurred in people who did not have a lab diagnosis but did have a CT.

“It is important that these also be counted.”

The new testing is only being used in Hubei, officials said.

Wang Zhonglin will take over from Ma Guoqiang as the party secretary in Wuhan.

The high-level appointments follow the sacking earlier this week of two leaders of the provincial health commission.

State media also reported that a slew of others were expelled from the party for transgressions related to the epidemic.

The public has widely criticized local officials for their handling of the outbreak. The virus first surfaced December in Wuhan, and has since spread to more than two dozen countries. 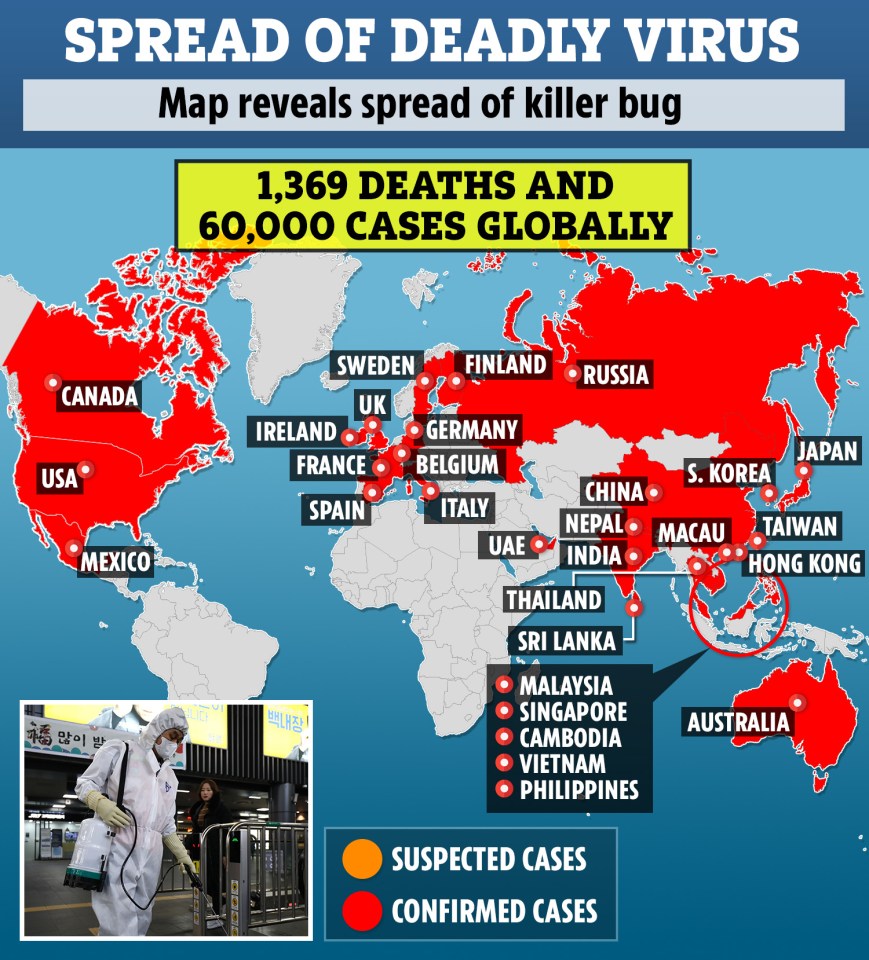 The woman contracted the virus in China and flew to the UK where she tested positive at a hospital in central London on Wednesday afternoon.

It takes the number of cases in the UK to nine as officials scramble to find everyone she had been in contact with.

Professor Chris Whitty, Chief Medical Officer for England said: “One further patient in England has tested positive for novel coronavirus (COVID-19), bringing the total number of cases in the UK to nine.

“This virus was passed on in China and the patient has now been transferred to a specialist NHS centre at Guy’s and St Thomas’ in London.” 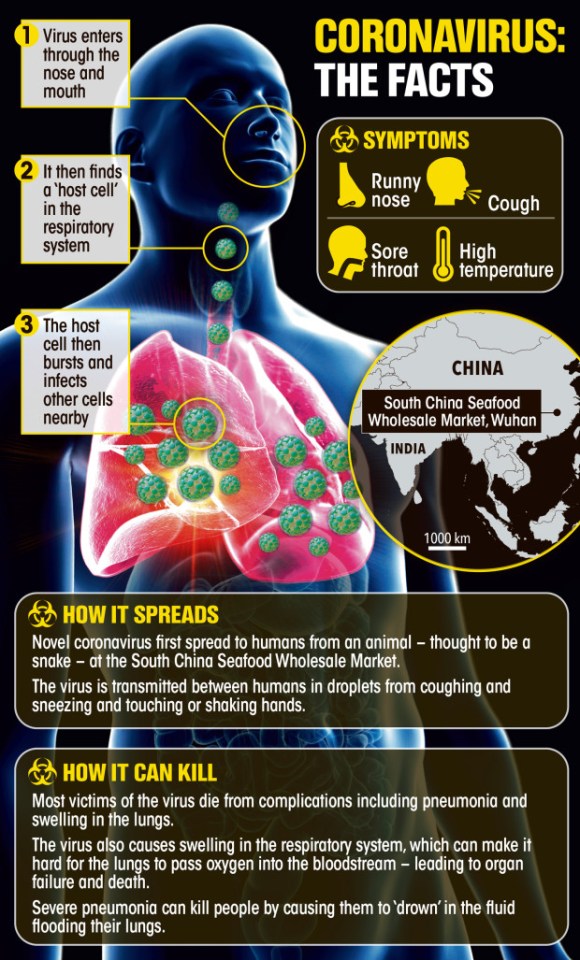 London’s congested transport network and 8.9million population will make it a nightmare to track down potential victims who should be tested.

Scientists have warned that London is at a greater risk than any other city in Europe due to the number of Chinese visitors that flock there each year.

More than 142,000 tourists arrive in London from China between January and the middle of March every year.

Dr Michael Head, Senior Research Fellow in Global Health, University of Southampton, said: “If confirmed, it is not surprising that London has seen its first case of the coronavirus.

“It’s a city of over 10 million people with several major international airports.


Coronavirus symptoms – the five warning signs to watch out for

“Both London and the rest of the UK can expect to see more cases, though hopefully these will continue to be isolated cases and seen in small numbers.”

A total of 1,759 people have been tested for coronavirus in the UK, of which 1,750 were confirmed negative and now nine positive.

Five cases have been confirmed in Brighton, two cases in York, another in an undisclosed location and the ninth diagnosis in London.

Source: thesun
Coronavirus deaths leap by 242 and 15k cases in one day – as Chinese official sacked