FOR some parents, an afternoon crafting with their kids is enough to bring them out in a cold sweat. All that glitter, all that mess . . .

But it doesn’t have to be that way.

New book Quick Crafts, by Emma Scott-Child, is full of quick, easy crafts to make with the kids – and best of all, there isn’t any sewing, painting or dreaded glitter required.

Emma says: “Craft has got a bad rep. It’s for people who knit their own knickers and eat glitter for breakfast.

“But you don’t need to be a craft nerd to have all the crafty bits. Most of the materials in this book might already be in your home.”

We’ve chosen four of the easiest projects that you can do with the kids this weekend. 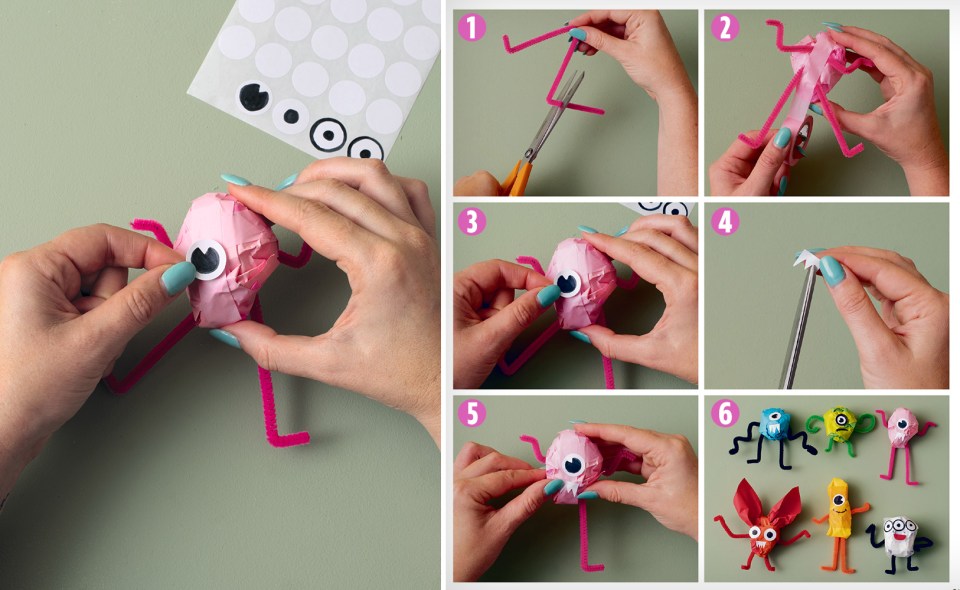 METHOD: Scrunch your paper into a ball, I used tissue paper for this one.

Wrap tape around it so it does not unravel.

Then, in picture 1, bend some pipe cleaners to make the arms and legs and trim with scissors if you need to.

Next, tape the pipe cleaners on to the back of the monster.

Draw eyes on the sticky dots, or cut out circles of paper for the eyes and stick them on your monster.

Remember, some monsters only have one eye – and others have loads – so just use your imagination.

Cut out any other features, such as fangs, see picture 4, eyebrows, or maybe even a moustache.

Stick those on to, to give your monster a scary face.

Now you can give your monster a name and think of all its scary skills.

Make lots of monsters in different shapes and sizes. 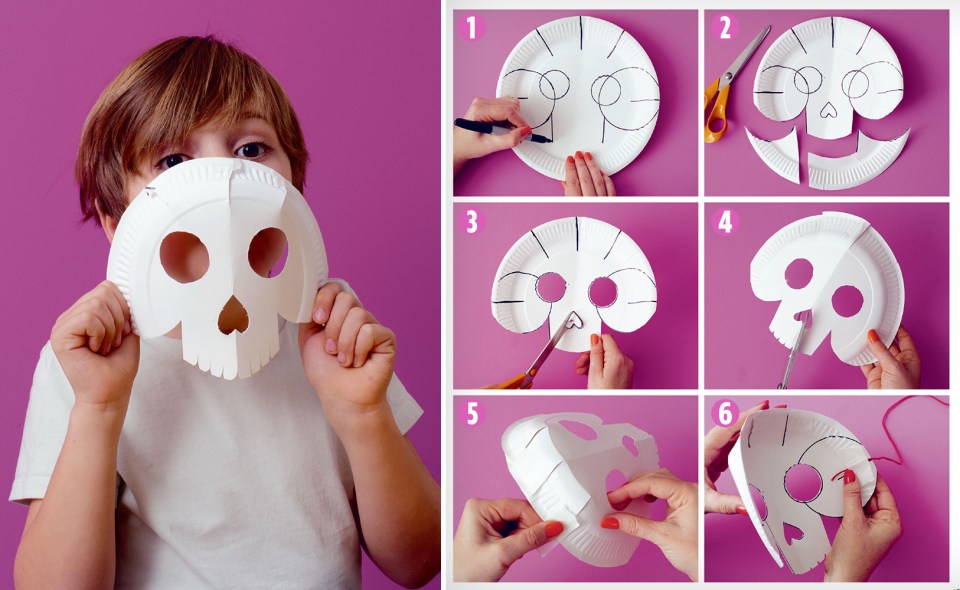 METHOD: First, imagine that the plate is a clock and mark lines that are about 4cm long at the 9, 11, 12, 1 and 3 o’clock positions. Use the 9 and 3 o’clock markings as a guide and trace around the roll of masking tape to create two circles. Then use a bottle top to draw eyes. Then draw two straight lines from the masking tape circles, down to the curved ridge on the plate. These will form the sides of the mouth.

Cut the bottom section of the plate as shown in picture 2, to make the face shape. Next, cut out eye holes and a heart shape for the nose.

Overlap these sections to create a 3D forehead for the mask. Fasten them with pieces of masking tape.

Tape some wool or strings to the sides so you can wear it as a mask. 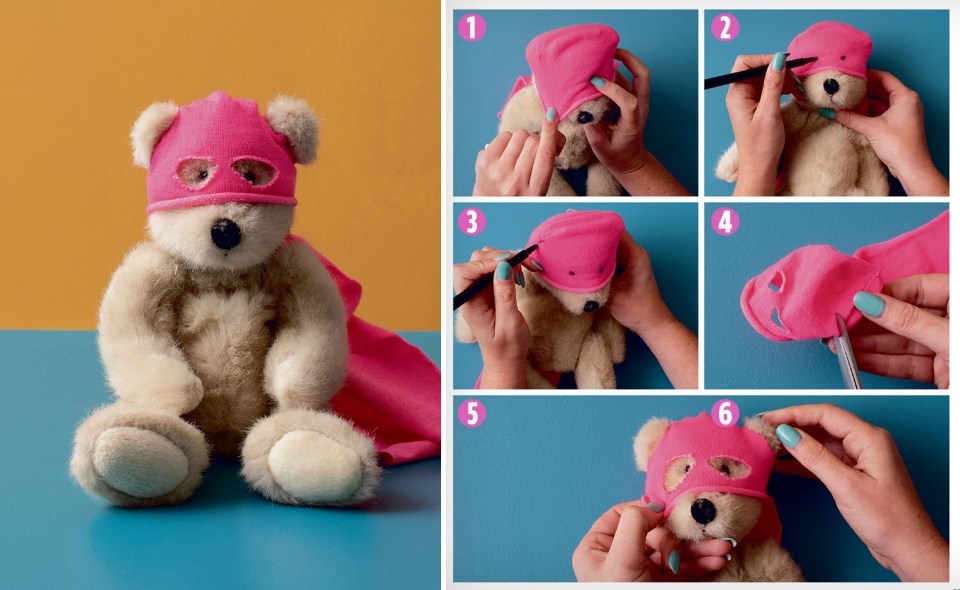 METHOD: Lay the sock flat and cut along the back of the ankle side so that the toe of the sock will become the hood and the cape.

Put the hood on the teddy’s head and mark out where the teddy’s eyes and ears are – see pictures 2 and 3.

Take the hood off the teddy, then cut the marked places to form slits for the eyes and ears.

You don’t need to cut a big hole at first, you can always make the holes larger.

Try the hood on the teddy and cut the eye holes some more if you need to.

Now your teddy is ready to be a masked avenger fighting for good or evil – depending on their preference. 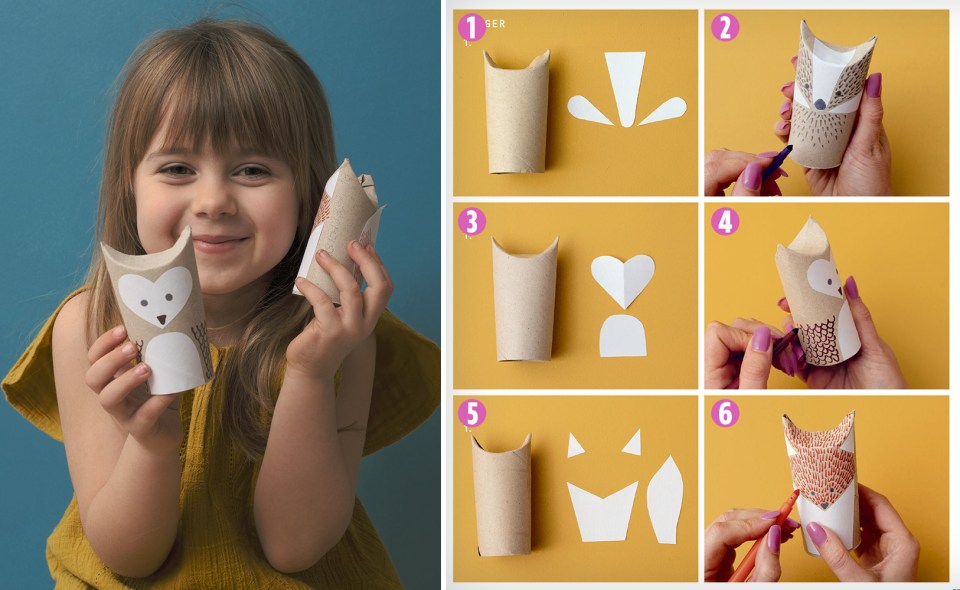 METHOD: You can make a range of fun woodland animals, including an owl, fox and badger.

Bend the top of a loo roll tube on one side, then the opposite side. This will make the little ear shapes.

For the badger, cut out three pieces of paper for the white markings and Glue them on.

Draw on eyes, an oval for his nose and add marks for fur.

For the owl, cut out two pieces of white paper for the white markings – a heart for his face and a semi-circle for his tummy, as shown. Glue them on.

Draw on his eyes, a small triangle for his beak and some feathers.

For the fox, cut out four pieces of white paper for his white markings and a tail. Glue them on. Draw eyes, a little heart for his nose and some orange fur.

THE Sun’s   Books Editor Natasha Harding and her five-year-old daughter Lexi tried some of the crafts from the book – and it’s a thumbs-up from them.

Natasha says: “My daughter loves making things but I’m not so keen.

“She tends to get frustrated because the finished item never looks how it’s supposed to. I get hot and bothered and can spend an hour trying to placate her, then ages tidying up.

“But the crafts in this book are simple and effective. We’ll use the book a lot over the holidays.”

Mum left ‘livid’ after daughter’s friend RETURNS her party bag with a note from mum slamming the contents… so who’s in the wrong?