DEATHS have fallen below the seasonal average for the first time since the coronavirus pandemic began.

It marks the end of the first wave of Covid-19 in the UK, one leading expert said today. 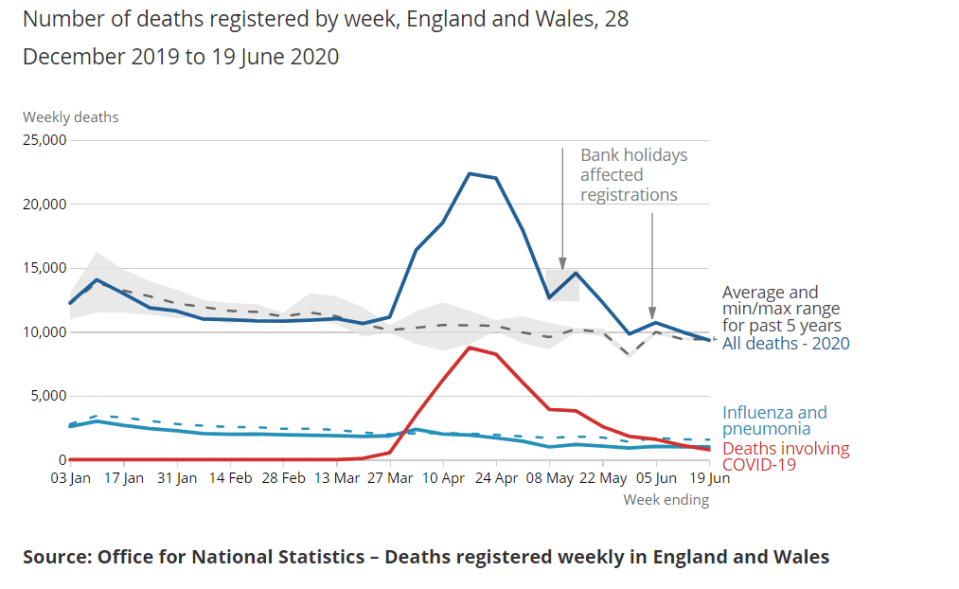 Professor Carl Heneghan, director of Oxford University’s Centre for Evidence-Based Medicine, said: “It means we are at the end of the first wave of excess deaths and we are now back to normal.

“I would now expect fatalities to stay normal or below average over the summer months, but we have to keep an eye on the data as we get closer to winter.

“Even though people are still dying of Covid, we have seen some displacement of deaths.

“The infection caused many vulnerable people to due a few weeks or months earlier than they would have, so overall fatalities are now lower.”

Deaths fall below normal for June

Data from the Office for National Statistics show 9,339 fatalities registered in the week ending June 19.

It is 65 deaths fewer than the five-year seasonal average.

Experts said it is the first time weekly mortality has been lower than typical since the week ending March 13.

In both hospitals and care homes the number of deaths fell below the average, with 782 and 49 fewer deaths respectively.

However, there were 827 excess deaths in people’s private homes.

Of the 9,339 deaths registered in the week ending June 19, 783 mentioned “novel coronavirus” – the lowest number of deaths involving Covid-19 for 12 weeks.

An analysis of NHS figures reveals the risk of the sickest patients being killed by the virus has plummeted by 40 per cent in less than two months.

Hospital data shows 70 per cent of infected Brits who ended up in intensive care due to coronavirus recovered in early May.

It compares with around 50 per cent of patients surviving at the start of the UK crisis in March – an improvement of 40 per cent.

And the latest data suggests around 85 per cent of those admitted to ICU with coronavirus are now beating the bug.

Oxford University experts say better treatment may be playing a role. But said such a dramatic improvement in outcomes is unlikely to be down to superior care alone.

Instead they think our immune system may be healthier in the spring and summer months, boosting overall survival chances.

Or that the virus is now becoming less deadly in humans.

Professor Heneghan said: “The change is so dramatic, it is very interesting. Between March and May, the number of ICU patients with Covid surviving has increased by around 40 per cent.

“That’s a huge improvement and can’t be explained by better treatment alone. These are the sickest patients, so you wouldn’t expect to see a huge change in their profile.

“One theory is that we all have ‘innate immunity’ which is run down over winter, and improves over the warmer months.

“Or that Covid is now less virulent and is causing less mortality. That often happens to viruses as they pass on through humans, they become less deadly.”

But while the country makes a recovery, Leicester has gone into lockdown after a spike in cases [/caption]

WHAT ARE EXCESS DEATHS?

The measure of excess deaths could provide a better reflection on how countries have handled the pandemic so far, with Professor Chris Whitty describing it as a “key metric” in monitoring the handling of infectious diseases.

Excess mortality is calculated by counting everyone who has died in a country and subtracting the average number of people who passed away over the same period in the past five years.

It therefore includes those who have died directly and indirectly from coronavirus, including those who did not get treated in hospital as a result of the crisis.

Four regions in England – the South East, South West, North West and East – registered no excess deaths, while the number of registered deaths in the West Midlands was similar to the five-year average.

In Wales, which recorded no excess deaths for the first time in three months last week, death registrations crept up to 44 deaths higher than than five-year average.

The number of weekly deaths involving Covid-19 fell in all regions in England and Wales.

Overall, 31,364 deaths involving coronavirus have taken place in hospitals in England and Wales.

The number of excess deaths in the UK since the coronavirus outbreak began is just above 65,000, which is broadly unchanged from one week ago.

Today’s figures from the ONS, which show 59,187 deaths above the five-year average in England and Wales between March 21 and June 19, follow figures last week showing the equivalent numbers for Scotland and Northern Ireland.

Together, this means the total number of excess deaths in the UK across this period stands at 65,079.

It comes as harsher restrictions are coming into force in Leicester following a surge in the number of coronavirus cases in the city.

Rising numbers of cases in the East Midlands city – 10 per cent of all positive cases in the country over the past week – mean the planned easing of restrictions on Saturday will not take place, with people have been advised against all but essential travel.

Non-essential shops will be closed in Leicester from today.

Health secretary Matt Hancock said Leicester’s seven-day infection rate was 135 cases per 100,000 – three times that of the next highest city.

CORONAVIRUS CRISIS – STAY IN THE KNOW

Don't miss the latest news and figures – and essential advice for you and your family.

To receive The Sun’s Coronavirus newsletter in your inbox every tea time, sign up here.

Get Britain’s best-selling newspaper delivered to your smartphone or tablet each day – find out more.

Source: thesun
First wave of coronavirus is OVER as deaths fall below normal for first time since start of pandemic, expert says

Why 3.5 million people want Joe Wicks to be their PE teacher