PAIN can be invisible, disrupting and invading every part of your life.

It can be hard to express the agony you are in – or comprehend how much pain someone else is going through. 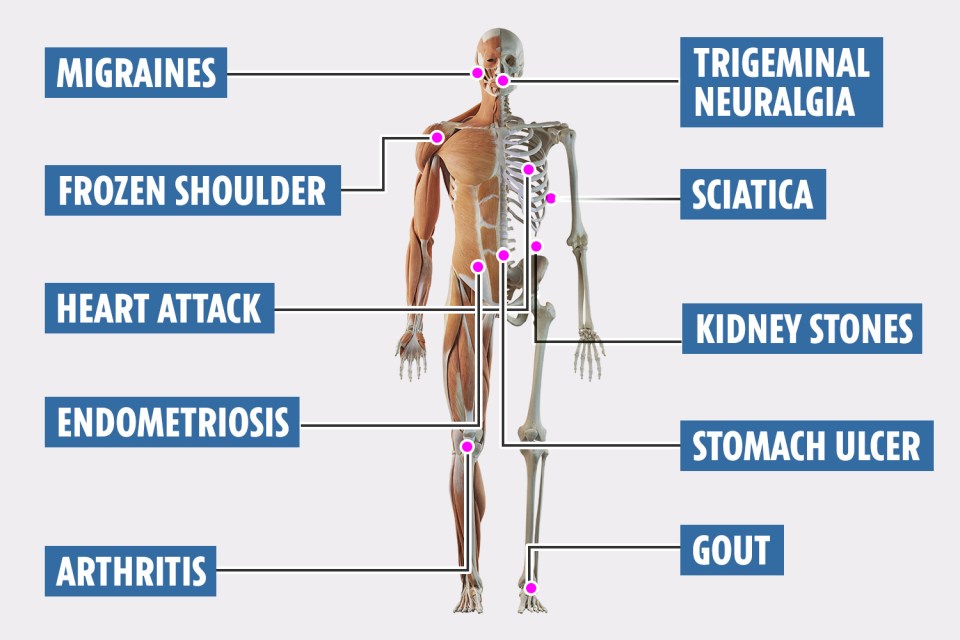 But the NHS has put together a list of what it considers to be the 20 most painful conditions.

The illnesses include those that leave sufferers in too much agony to perform normal tasks that many take for granted.

So, in no particular order, here’s the full list…

Endometriosis is a condition where tissue similar to the lining of the womb starts to grow in other places, such as the ovaries and Fallopian tubes.

It’s a long-term condition that can affect women of any age.

Symptoms can vary but the pain signs include pelvic pain, pain after s*x, feeling sick and difficulty getting pregnant.

Shingles is an infection that causes a painful rash.

The first signs include a tingling feeling in an area of skin or a headache before a rash appears a few days later.

It can take up to four weeks for the rash to heal, in which time the skin may be painful.

A slipped disc – also known as a prolapsed or herniated disc – is when the soft cushion of tissue between the vertebrae in your spine pushes out.

If that tissue presses on the nerves that run down the spinal cord, it can be excruciating.

It can cause lower back pain, numbness or tingling in the shoulders, arms, back, legs or feet, neck pain, problems bending or straightening your back and muscle weakness.

It can also cause pain to run down from the buttock and leg if it presses on the sciatic nerve – known as sciatica.

While in most cases it will get better slowly with rest, gentle exercise and painkillers, in more severe cases surgery is an option.

Appendicitis typically starts with a pain in the middle of your tummy (abdomen) that may come and go.

Within hours, the pain travels to your lower right-hand side, where the appendix is usually located, and becomes constant and severe.

Pressing on this area, coughing or walking may make the pain worse.

If you have appendicitis, you may also have other symptoms, including nausea, being sick, loss of appetite, constipation or diarrhoea and a high temperature.

Frozen shoulder means your shoulder is painful and stiff for months, sometimes years.

It happens when the tissue around your shoulder joint becomes inflamed.

Docs usually treat it with shoulder exercises and painkillers.

Cluster headaches are excruciating attacks of pain in one side of the head, often felt around the eye.

They begin quickly and without warning.

Anyone can get them, but they’re more common in men and tend to start when a person is in their 30s or 40s.

Broken bones, known as a fracture. can happen after an accident like a fall, or by being hit by an object.

The three most common signs of a broken bone are pain, swelling and deformity.
However, it can sometimes be difficult to tell whether a bone is broken if it isn’t displaced.

Although most cases of CRPS are triggered by an injury, the resulting pain is much more severe and long-lasting than normal.

The pain usually only affects one limb, but it can sometimes spread to other parts of the body.

The skin of the affected body part can become so sensitive that a slight touch, bump or even a change in temperature can cause intense pain.

CRPS often gradually improves over time. But some people with CRPS experience pain for many years.

A heart attack, known medically as myocardial infarction or MI, is a serious medical emergency in which the supply of blood to the heart is suddenly blocked, usually by a blood clot.

A lack of blood to the heart may seriously damage the heart muscle and can be life threatening.

Symptoms can include chest pain, shortness of breath, feeling weak and feeling anxious.

Not everyone experiences chest pain – and often the pain can be mistaken for indigestion.

Arthritis is a common condition that causes pain and inflammation in a joint.

In the UK, more than 10 million people have arthritis or other, similar conditions that affect the joints.

Osteoarthritis and rheumatoid arthritis are the two most common types of arthritis.

It can be hard to diagnose as symptoms are similar to other conditions.

Attacks of gout are usually treated with anti-inflammatory medicine like ibuprofen.

Sickle cell disease is the name for a group of inherited health conditions that affect the red blood cells.

The most serious type is called sickle cell anaemia.

It is a serious and lifelong health condition, although treatment can help manage many of the symptoms.

A migraine is usually a moderate or severe headache felt as a throbbing pain on one side of the head.

Many people also have symptoms such as feeling sick, being sick and increased sensitivity to light or sound.

It’s a common health condition that affects around 1 in 5 women and 1 in 15 men.

Sciatica is when the sciatic nerve, which runs from your hips to your feet, is irritated.

Symptoms may be worse when moving, sneezing or coughing.

It usually gets better in 4 to 6 weeks but can last longer.

Kidney stones are usually found in the kidneys or in the ureter, the tube that connects the kidneys to your bladder.

They can be extremely painful, and can lead to kidney infections or the kidney not working properly if left untreated.

Stones can develop in one or both kidneys and most affect people aged 30 to 60.

It’s often described as a sharp shooting pain or like having an electric shock in the jaw, teeth or gums.

It usually happens in short, unpredictable attacks that can last from a few seconds to about two minutes and stops as suddenly as it starts.

In most cases, trigiminal neuralgia affects just one side of the face, with the pain usually felt in the lower part of the face.

Acute pancreatitis is a condition where the pancreas becomes inflamed  over a short period of time.

The pancreas is a small organ, located behind the stomach, that helps with digestion.

Most people with acute pancreatitis start to feel better within about a week and have no further problems.

But some people with severe acute pancreatitis can go on to develop serious complications.

Acute pancreatitis is different to chronic pancreatitis, where the pancreas has become permanently damaged from inflammation over many years.

Stomach ulcers, also known as gastric ulcers, are open sores that develop on the lining of the stomach.

Ulcers can also occur in part of the intestine just beyond the stomach. These are known as duodenal ulcers.

Fibromyalgia, also called fibromyalgia syndrome (FMS), is a long-term condition that causes pain all over the body.


Dad, 32, left paralysed with half a skull and 'sunken' brain after brutal attack


Diner left paralysed from neck down after eating under-cooked chicken

RUN DAY AT A TIME

RUN FOR YOUR LIFE

'HE CHANGED OUR LIVES'

Although there’s currently no cure for fibromyalgia, there are treatments to help relieve some of the symptoms and make the condition easier to live with.

It’s common to have some pain after surgery, though the intensity of the pain will vary according to the type of operation.

But too much pain after surgery is not a good thing, the NHS website explains, and you should never feel you have to “tough it out”.

When will dentists reopen in UK?

Handwashing 101: A Guide To Proper Washing (And Drying)