PEOPLE who suffer from hay fever could have their misery quelled with a new wrist band that sold out in just three hours.

Brits are set to be hit with a pollen bomb this week and many have been left wondering how they will stop their symptoms from becoming unbearable.

Those who suffer from allergies have said the Qu-Chi band could be the answer.

Today the majority of the country will experience very high levels of pollen, with Grampian having high levels and the Highlands having medium levels.

People who live in Orkney and Shetland will escape the sneezes as the area has low pollen levels for today.

This is while for the rest of the week most of the country will also have very high levels of pollen in the air.

The Qu-Chi Hayfever Band cost £12.95 and has been hailed as “amazing” by those who suffer during pollen season.

The band cost £12.95 and can be used alongside your normal hay fever medication[/caption]

Media personality Jodie Marsh posted a photo of her partner Billy Collins on Instagram where he was wearing the band.

As a result the band sold out within just three hours and it is also the 15th best seller in Amazon’s health and personal care section.

The band applies pressure to the LI-11 point on the elbow known as Quchi.

By putting pressure on this part of the body, energy is pulled away from the head, nose, face and throat.

This physical pressure can help relieve symptoms related to the nose and throat. 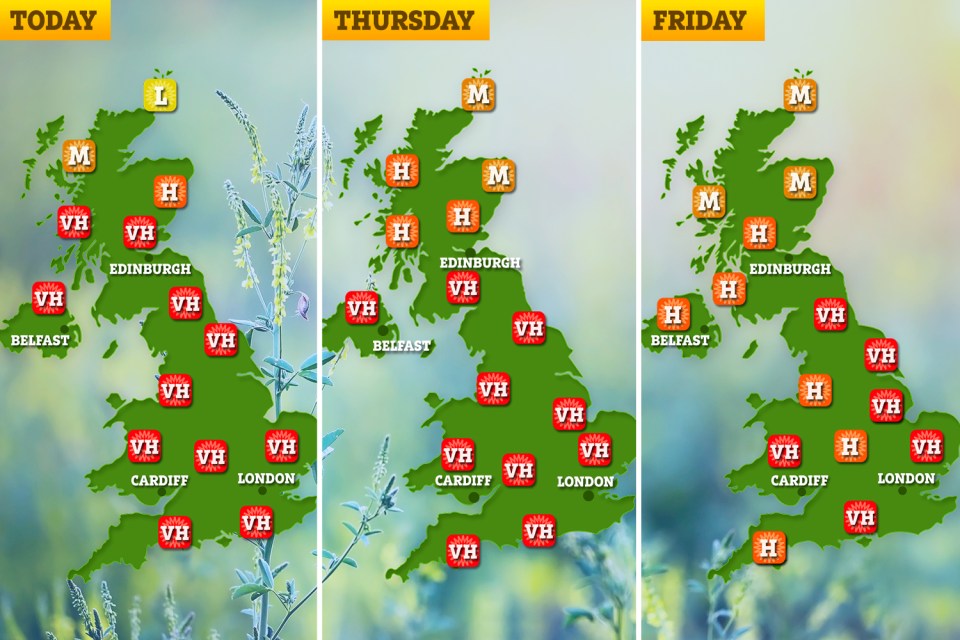 It can be worn once symptoms begin and if your symptoms are particularly severe one day then there is a small button you can use to apply extra pressure.

It’s drug free and can be used alongside your traditional hay fever medication such as eye drops, antihistamines and nasal sprays.

Antihistamines help hay fever sufferers as they block the chemical called histamine in the body.

They cause relief from animal, pollen or dust allergies.

This is while nasal sprays can be used to treat the cold like symptoms hay fever sufferers experience.

Many people who suffer from hay fever will have itchy or red eyes, eye drops can also be used to relieve these symptoms.

These usually contain either Cetirizine or Loratadine. If one doesn’t work for you, you can try the other one.

Some contain chlorphenamine and these are more liable to make you drowsy. All antihistamines can make you drowsy and it is illegal to drive if they do. It is also dangerous to operate machinery.

Again, look for the active ingredients – beclomethasone, budesonide, fluticasone or mometasone – own brand versions can be cheaper.

Organic drug-free allergen barrier balms such as HayMax are applied to the nostrils and bones of the eyes in the morning and throughout the day.

They are used to stop allergens from entering the body through the nose.

They are especially useful as they can be used immediately, together with other hay fever products and are suitable for children and pregnant and breastfeeding women.”

Taking products that can help boost your immune system can be useful.

Bee Prepared Daily Defence Immune Support is an immune boosting wellness formula for adults and children that contains all natural ingredients which have a history of benefits and clinically researched actions which help support the immune system.

Please note that this product isn’t suitable for pregnant or breastfeeding mums.

Acupressure is a non-invasive form of acupuncture, achieved by applying physical pressure of hands, elbows, feet or devices to the same acupuncture points.

It is used in a wide variety of conditions including hay fever. The Qu-Chi Hay Fever Band uses acupressure to target key pressure points on the body associated with allergy symptoms.

The band is worn on one of these pressure points, the elbow. Adult and child sizes are available. This product is not suitable for pregnant women.

Hay fever sufferers need to make sure they have plenty of aids this week as experts have claimed that the freak heatwave in the UK will make it the worst week in the year for sufferers.

In some places temperatures are set to reach 34C and this spells further misery for hay fever sufferers.

Airborne allergens expert and creator of HayMax allergen barrier balms, Max Wiseberg, said: “Once again we’ve just had lots of rain during the peak pollen season, which has fed the grass beautifully.

“And this can only mean one thing – yet another massive explosion of pollen.


We can't behave like before & virus will be here for another YEAR, warns Whitty

He added: “Acupressure is a non-invasive form of acupuncture, achieved by applying physical pressure of hands, elbows, feet or devices to the same acupuncture points.

“It is used in a wide variety of conditions including hay fever. The Qu-Chi Hay Fever Band uses acupressure to target key pressure points on the body associated with allergy symptoms.”

Listener Questions For An Infectious Disease Doctor About COVID-19

I only get pleasure by squeezing my thighs together – will I ever enjoy s*x?