WITH double the risk of being hospitalised, 37 per cent higher death rates and a lack of equipment once you’re in hospital, it’s fair to say the news for overweight Brits has been dismal over the last two weeks.

And experts have now supported theories of a link between obesity and higher risks from Covid-19, revealing it could prove a deadly combination – triggering multiple organ failure and crushed respiratory systems. 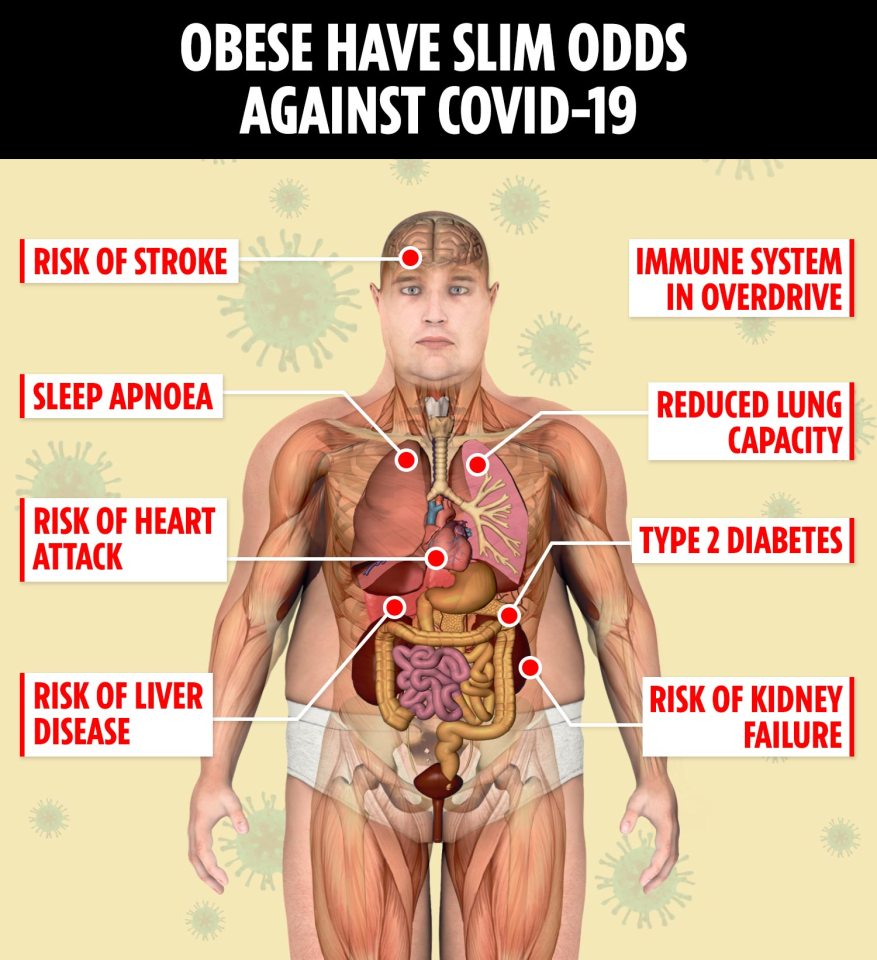 With his usual weight loss surgeries currently stalled, he offered his services to an ICU ward in London and says most of the patients he saw there, under 70 years old, were overweight or obese.

Of them, he recalls seeing one 47-year-old man – who was classed as “mildly obese” – placed on a ventilator within hours of being admitted, before his organs slowly began failing as medics desperately tried to save him.

It’s pushed Mr Ahmed, along with more medical professionals, to plead with Brits to focus on losing weight to improve their chances, should they contract coronavirus.

In fact he claims for many people, losing just five BMI points alone could lower their risk by as much as 50 per cent, telling Sun Online: “Since age, gender and ethnicity are not modifiable, obesity is emerging as the one risk factor that we can treat to reduce the risk of significant Covid-19 illness/death.”

Now, experts reveal the truth behind the alleged link between obesity and coronavirus risks…

‘Twice as likely to be hospitalised’

A shocking study recently claimed that being obese could double the risk of needing hospital treatment for coronavirus.

Scientists from Glasgow University reviewed data from more than 400,000 people and found as body mass index increased, so did the risk of having a severe case of Covid-19.

Paul Welsh, of Glasgow University, told The Times: “We’ve seen in numerous different studies that obese patients tend to progress in a worse way. People with obesity are more likely to end up in hospital with Covid.”

While a link is yet to be proven, it’s a theory Mr Ahmed supports, as he says: “Nobody to date has yet worked out the precise causal mechanism, but it would appear that the coronavirus seems to attack the respiratory system of obese people much more severely.”

The theory is also supported by consultant bariatric surgeon Kesava Mannur, who says: “Since obesity has been shown to increase vulnerability to infections, it may be a risk factor for COVID-19 related mortality.”

Typical symptoms of Covid-19 include a persistent cough, a fever/temperature and difficulty breathing.

And it’s the latter that concerns Mr Ahmed in particular.

“Obesity carries complications anyway, but with Covid-19 my own hypothesis is [that] there’s definitely a link with poorer outcomes… More severe lung disease, higher and substantial risk of needing a ventilator.

“My theory is, for people that are suffering a lot with Covid-19, it’s because their immune systems are overreacting.

“We’ve known for decades that obesity is a pro-inflammatory condition. It may well be that the obese folks are worse off when they get Covid-19 because they already have an element of an inflammatory state because of their obesity.

“Their body’s immune system is in overdrive and basically decimating their lungs.”

On top of that, obese people – defined as those with a BMI of 30 or over – may also suffer from sleep apnoea and asthma.

“On that basis as well, they already have poor lung function and then getting the stress of the Covid-19 on top of that, basically tips them over the edge,” he says.

Mr Mannur agrees and says there’s also increased pressure on the diaphragm from excess fat – which can have a huge impact on the entire respiratory system.

“The fatter we are, the lower our lung capacity is, as the abdomen pushes the diaphragm up limiting the rib cage space, reducing the lung reserve and the higher the O2 requirement and energy requirement,” he explains. “The body is in ‘overdrive’ mode all the time.”

Essentially, it’s coupling an already weaker respiratory system with a virus that’s proven to attack it.

Lockdown has hit all Brits hard over the last few weeks, but while many can still go outside some, who have been classed as “vulnerable”, have been forced to stay indoors and have little or no human contact.

Among them are those suffering from diabetes or heart disease – just two of the conditions that are also closely linked to obesity.

According to the World Obesity Federation, “coronavirus can cause more severe symptoms and complications in people with obesity-related conditions”.

Mr Ahmed says: “People that are obese will have higher rates of organ disease overall.

“Typically obesity attacks the lungs, but also the heart, the kidneys, the liver and the pancreas because of the link to diabetes.

“But the amazing thing is, if you treat the obesity, almost all of these conditions are reversible or you can definitely make a big dent and improve the condition.”

In fact Mr Ahmed saw the impact coronavirus can have on multiple organs just recently, while working in an ICU ward in London.

“I remember seeing a 47-year-old man who – and it’s quite tragic – he was actually on the waiting list for weight loss surgery,” he says.

“He was going to have it in around six months, a gastric bypass, and unfortunately in the interim he caught the virus.

He had problems with his lungs obviously, but also his heart. He needed to drugs to keep his blood pressure up, and his kidneys were also beginning to fail.

“He was admitted via an emergency unit and his condition deteriorated overnight, so he had to be admitted to intensive care.

“He was mechanically ventilated and needed some extra pharmaceutical infusions to keep his blood pressure up.

“When you get this big inflammatory response it’s not just one organ that gets impacted, your other organs start to fail.

“He had problems with his lungs obviously, but also his heart. He needed to drugs to keep his blood pressure up, and his kidneys were also beginning to fail.

“I don’t know what exactly happened in the end sadly, but I don’t think he survived.”

With obese people often suffering comorbidities – the presence of one or more additional conditions on top of a primary condition – Mr Mannur says that “these are the ones who are at risk of getting kidney failure, respiratory failure and heart failure requiring a lot of support”.

He adds: “Their body reserve is less and they are put to severe strain when confronted with disease or complications.”

The research backs the theory

A recent study in a hospital in Shenzhen, China, found overweight and obese patients had a higher risk of developing pneumonia.

Researchers focused on 383 Covid-19 patients between January and February and found those who were obese, according to their BMI, had a 2.4 times higher chance of developing severe pneumonia.

Meanwhile a study of 3,615 Covid-19 patients, by New York University’s Grossman School of Medicine, recently found that those who were younger than 60 and had a BMI between 30 and 34 were 1.8 times more likely to require critical care in ICU.

For patients with a BMI of 35 or higher, they were 3.6 times more likely to end up in ICU.

A shortage of specialist beds, equipment and hoists

As if health issues weren’t enough to contend with, there can be issues with equipment in hospital too.

The World Obesity Federation states difficulties can arise in hospital as “it is more difficult to intubate patients with obesity, it can be more challenging to obtain diagnostic imaging (as there are weight limits on imaging machines), [and] patients are more difficult to position and transport by nursing staff”.

For morbidly obese people, the problems only get worse however.

Mr Mannur explains: “The challenges faced by the health system are huge; there is difficulty in getting the right type of beds especially the special ICU beds, chairs, theatre tables, if they get ill.

“There are not many of the right sized CT scanners to do the tests on very obese [people]. It is generally difficult to intubate them and nurse them. More personnel are needed to care for them.

“A lot of hoists are also [needed] to lift or move them.”

Probe into how obesity can affect Covid-19 vulnerability

Health Secretary Matt Hancock ordered an urgent probe last week into how factors such as obesity, as well as ethnicity, can affect vulnerability to Covid-19.

He said: “Our knowledge about this virus grows daily and it appears some groups are more affected than others.

“Emerging data from around the world suggests there could possibly be a relationship between obesity and the impact of Covid-19 on individuals.”

However he added: “It’s too early to say if obesity in itself is a factor or conditions associated with it – or there is not enough data yet to rule it out – so we need to approach any assumptions with caution.

“Every death from this virus is a tragedy and behind each statistic is a name, a loss and a family that will never be the same again.”

The review will analyse how factors such as ethnicity, gender and obesity can affect people’s vulnerability to coronavirus.

Around a third of adults in Britain are obese with a BMI above 30 and the latest figures show the UK has one of the highest death rates per head of population in Europe, behind only Ireland and Andorra.

But Mr Ahmed says that for most people with a BMI of 30 or more, losing just 5 BMI points could slash their risk from coronavirus dramatically.

“People absolutely need to take this seriously,” he says. “They don’t need to lose a massive amount of weight, from the studies I’ve looked at – and if we assume that Covid-19 doubles your risk of poor outcome if you’re obese – for most people, just reducing their BMI by approximately five points, roughly for the average height person about two stone, that might be enough to cause a 50% risk reduction of poor outcome from Covid-19.

“That’s rough mathematics, but taking those assumptions onboard, it’s only a small weight loss for a big outcome.”

Mr Ahmed is now pushing for weight loss surgery to be prioritised more – insisting by reducing obesity in the UK, the risks from coronavirus could also potentially be reduced.

“This is risking lives,” he says. “We know they have a higher proportion of obesity, so why not give more importance and treat these people earlier so they can reduce the burden on the ICUs and the NHS?”

‘Going on a diet isn’t the way to do it’

And she urged people who are significantly overweight to overhaul their lifestyles to help protect themselves from coronavirus, as well as other illness.

Speaking during Wednesday’s Downing Street press conference, she said: “We have very fine evidence, actually, from rather beautiful studies, gathered from in patients in our hospitals with Covid-19 and those studies show that once you’re in hospital being obese is an additional risk factor for being admitted to an ICU or indeed for death.


Truth about obesity and coronavirus – from 'crushed lungs' to organ failure

“My understanding about the way to lose weight is that going on a diet isn’t the way to do it.

“What you have to do is actually decide to completely change your lifestyle, you have to decide to do something that is going to be enduring, not just going on a diet.

“I understand that’s a really difficult thing to do, but under all circumstances – pandemic or no pandemic – it’s better not to be obese.”


Source: thesun
The truth about obesity and coronavirus – from ‘crushed lungs’ to organ failure as bodies put under ‘severe strain’

Coronavirus ‘may never go away’ and could become endemic like HIV, WHO warns