BRITS are dying nearly three years younger as a result of our bulging waistlines, a damning report reveals.

It also warns the obesity epidemic costs every person in the UK an extra £409 in taxes annually.

Brits are dying nearly three years younger as a result of our bulging waistlines, a damning report reveals[/caption]

The cash is swallowed up by additional healthcare spending and lost productivity.

The analysis by the Organisation for Economic Co-operation and Development looked at 52 nations – and is the first major report to look at the impact of obesity on life expectancy.

It shows the UK is the second fattest nation in Europe, after Malta.

The report warns our tubby ways are slashing 3.4 per cent off of our Gross Domestic Product – putting Britain in the bottom half for lost funds.

Two in three Brit adults are now overweight or obese. 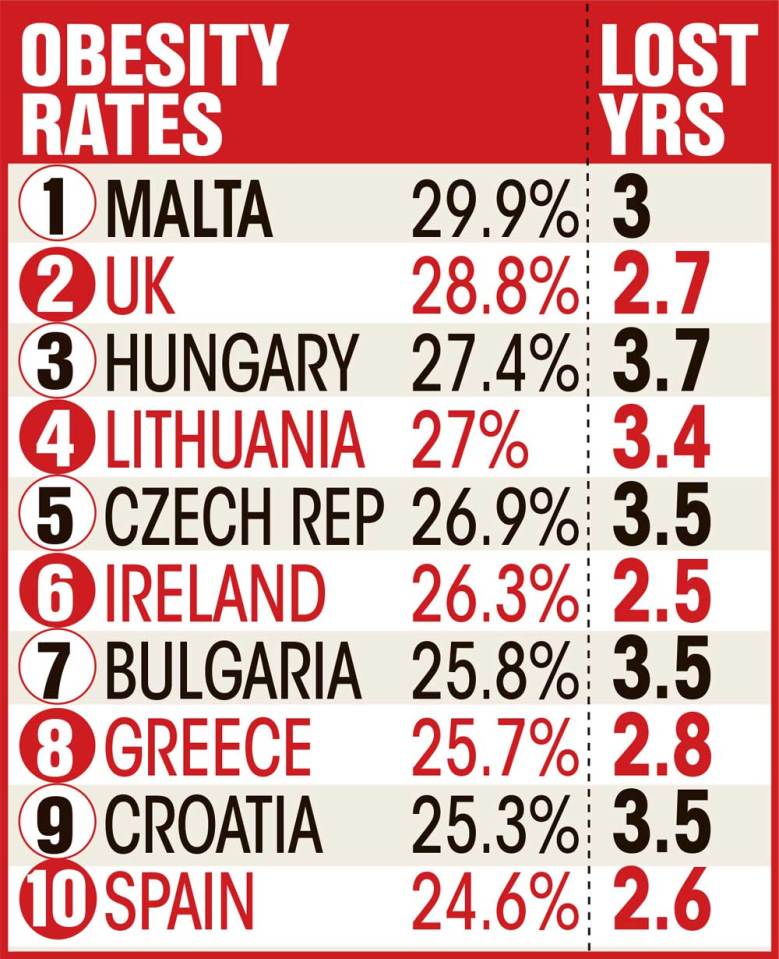 The OECD report found people in the UK now live on average 2.7 years less as a result of the fat crisis.

Tam Fry, from the National Obesity Forum, said: “This is not a wake-up call, it is a fire alarm.

“For years experts have been predicting obesity would shorten our life expectancy. Now the OECD has calculated we lose almost three years each on average. This is really disturbing.

“Also, the average Joe is hit in the pocket by £400 each year. If this doesn’t spur our leaders to take action, nothing will.”

Experts from the OECD calculated for every £1 spent in the UK on fat-fighting initiatives, £6 is saved.

It also reveals around eight per cent of NHS spending is due to people being too heavy.

The findings come just a day after Professor Dame Sally Davies outlined a swathe of nanny state proposals to halve obesity rates in kids by 2030.

The outgoing Chief Medical Officer’s proposals include banning all eating and drinking on buses and trains, putting biscuits in plain packaging, and ending pie sales at football matches.

Jason Halford, chair of the European Association for the Study of Obesity, said: “What this shows is the shift into morbid obesity, which is particularly worrying and damaging.

“The OECD report raises the alarm on the global costs of obesity to the economy for the first time.”

The analysis claims only three in ten Brits have a healthy diet, while three in four adults fail to eat enough fruit and veg.

The claim better labelling, limiting junk food advertising and fat-fighting campaigns could prevent 130,000 Brits from falling ill by 2050 and save the economy £54 million annually.

most read in health news

HANGING BY A THREAD


Behind the scenes on Meg, Prince Harry, Kate and Wills' Every Mind Matters video

Public Health England wants calories in popular meals – such as pizzas and burgers – slashed by 20 per cent in a bid to tackle the nation’s bulging waistlines.

The report claims if this was achieved, then 606,000 Brits would be spared from disease by 2050 and £211 million saved annually.

OECD boss Angel Gurría said: “There is no more excuse for inaction.

“There is an urgent economic and social case to scale up investments to tackle obesity and promote healthy lifestyles.”

Data from NHS Digital shows 20.2 per cent of ten and 11-year-olds are dangerously fat.

How will COVID-19 Affect Economies of Latin America & the Caribbean?